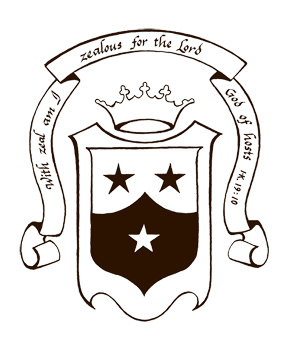 The colors of the shield are BROWN and WHITE. The dark mountain (bottom area) originally symbolized a ” cloaked shield,” light in the upper part and darker brown in the lower section. The “cloaked shield” represents the HABIT of the Ancient Order of Carmel: the brown tunic and white cloak.

Some writers explained that the shield of Carmel itself represents the defense of our Church and our Faith. The mountain inside the shield represents Mount Carmel in Palestine where the first Carmelites lived.

Because Elias, the first hermit on Mount Carmel, is considered the founder of the Carmelite Order, the star inside the mountain refers to the earliest period, from Elias to the birth of Christ. The second marks the period from Christ to the Crusades; The third star represents the period highlighted by the Scapular vision.

After the Scapular promise in 1251, the Carmelite order entered upon a period of prosperity that lasted for more than 300 years. The Order’s purpose of spreading devotion to Mary was supplemented by a renewed interest in learning. Similarly, Sisters of Mount Carmel can consider the star inside the mountain in relation to their own history:

The crown above the shield of our coat of arms symbolizes Mary, Queen of Carmel. It reminds all Carmelites that they are called to enkindle devotion to Mary in the hearts of her children.

The banner that swirls around the escutcheon contains the words, of the prophet Elijah,