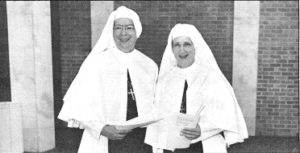 Mother Marcella Foret and Sister Carmelita Danos were sent to the Philippines to establish the new mission.

The sisters of Mount Carmel opened their first foundation in the Philippines in 1962 in Dumaguete City upon the invitation of Bishop Epifanio Surban.  The sisters, who were engaged in socio-pastoral and health ministries, managed two Diocesan facilities, the Holy Child Hospital and the Dumaguete Cathedral School.

In 1969 the Congregation opened a house in Manila and in 1972 built its central house in Fairview, Quezon City.  Two years later, responding to the need of the Fairview community and to a petition presented by the barangay captain, the sisters used the convent facilities to accommodate preschoolers and grade one students.  The subdivision owners, began the construction of a school building adjacent to the convent.  In June 1975, the school accepted students up to grade four.  The Congregation was asked by the owners to manage the school.  The preschool remained in the convent and continued to be owned and operated by the Sisters of Mount Carmel.

In 1995, after consulting the residents and conducting a feasibility study, the Sisters of Mount Carmel Catholic School, Inc. or SMCCS, Inc. was incorporated.  Grade one students were accepted and subsequent levels were added toward completion of full elementary and high school facilities.