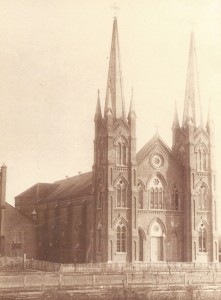 On November 14, 2015, Saint Elizabeth Catholic Church Parish in Paincourtville, LA, celebrated their 175th Years of Faithful Discipleship. Most Reverend Bishop Robert W. Muench presided over the Eucharistic celebration along with Reverend Andrew Merrick, the Pastor of the parish and the faithful parishioneers. Some members of the Sisters of Mount Carmel were present during the celebration.

History of Sisters of Mount Carmel Foundation in Paincourtville:

The Sisters of Mount Carmel final foundation along Bayou Lafourche was in Paincourtville, only a few miles from the spot where Sisters Therese and Augustine had spent their first 4 years in Louisiana. Priests from Plattenville originally took care of the area. A church was erected in 1840 and the first resident pastor, Father A. Andrieu, C.M., was appointed four years later. Father Jean Baptiste Lesaichere who became pastor in 1867 invited the Carmelite Sisters to St. Elisabeth Parish in Paincourtville.

Application for sisters to take charge of a boarding and day school was made by Rev. Father Lesaichere. Rev. Mother Therese, finding the offer favorable to the community, accepted. Consequently, a house was purchased by the community and soon transformed into a convent, ready to receive the sisters who left from Thibodaux on May 10, 1876, for the new field of labor. They were Mother Alix [Lacroix], assisted by Sisters Antonia [Colombo], Denis [Bourg], Mary of the Crucifix [Lainé], and Francis Xavier [Olier].

The house was soon too small to accommodate the number of pupils, daily increasing. It was found necessary to build a large convent. Labor was at once begun with preparations for a fair which was given in the new house as soon as it was up. $2,000 were [sic] realized. Later on, a second fair was given with the same success.

The Paincourtville school usually counted about 50 pupils who attended classes during the school’s early years. Sister Alix remained at Paincourtville until 1880, one year before her death. Sister Mary of the Cross Vinel was superior in 1881 and succeeded Sister Alix.

Sister Valerie was sent to Paincourtville in 1878. When yellow fever forced the school to close on October 1 of the same year, young Sister Valerie wrote to her beloved Mother General Mother Therese, asking permission to go out into the stricken homes of the country folks and nurse yellow fever victims.

From October 1 to December 17, 1878, Sister Valerie…went forth from house to house, nursing whole families…. Very little help could be found. Many a night was she alone, save for a man or two who would call under cover of night to find out if there were any corpses to be removed.

In small towns such as Paincourtville, the sisters’ work and influence was interwoven into the town’s fabric. But the historian also suspects that there was an immeasurable quality to the sisters’ work. He wonders how many Louisianians could echo the thought of Mr. John Benoit who recalled his days at the sisters’ school in Carencro around the turn of the century and, from the vantage point of old age, mused, “They not only teach you school knowledge, but also they teach you the religion, the thing you need for life. They point you in the right direction.”

The Sisters of Mount Carmel are grateful to all the parishioneers for their dedication and continued support to the mission of the sisters even if they are no longer physically present in the area.