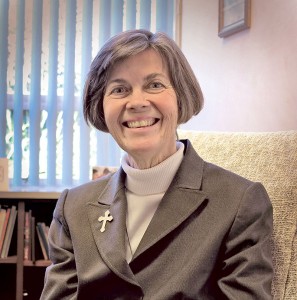 Mount Carmel Sister Beth Fitzpatrick considers herself blessed. She said over her 30-plus years in religious life she’s grown to discover God’s gifts to her and what was necessary – to know God, to love God and to serve God.

Love for religious life and uncovering collegiality among religious congregations will be gifts Sister Beth will utilize as she takes the reigns this month from Sister of the Holy Family Sylvia Thibodeaux as executive director of the Department of Religious for the Archdiocese of New Orleans.

Working among religious men and women has been part of her vocation early on. As a novice studying to be a member of the Congregation of Our Lady of Mount Carmel, she said she lived inter-community life in a former convent at Our Lady of Lourdes in Slidell, studying alongside others becoming Carmelites, Marianites and Dominicans.

“My whole religious life has been collaborating with other communities, and that’s been part of the joy,” she said. “I believe because I grew up in religious life in an atmosphere where gifts of other congregations were appreciated and loved, that sense of appreciation will enable me to tend to others’ needs and ways of other religious life.”
She’s always been a teacher
Sister Beth has been mainly a teacher – at E.D. White Catholic School in Thibodaux, Mount Carmel in New Iberia and GED courses at Hope House in the St. Thomas Housing Development. She spent a total of 15 years at Notre Dame Seminary in New Orleans, six of them teaching introduction to prayer and the history of Christian spirituality to pre-theologians. She also supervised pastoral assignments of seminarians.

“It was a wonderful experience,” Sister Beth said. “I loved those years at Notre Dame Seminary. I loved to teach and was teaching what I loved. Only my own sisters (of Mount Carmel) could get me out of there.”

She’s referring to being tapped in 2005 as president of the Congregation of Our Lady of Mount Carmel through 2013. She also served previously from 2001-05 on the executive council.
Her presidency taught much about resilience, love from others and working with people from every walk of life as Sister Beth led the Sisters of Mount Carmel through the aftermath of Hurricane Katrina. She considers herself a better person for having survived the experience.
Katrina was a test of faith
“At first it was frightening, because I didn’t know where everybody was (her religious or birth family), and then what about the finances?” she recalled. “Everything that we (Carmelites) had was lost – the motherhouse, school, faculty house.

“I didn’t know how we would restore it, but we knew what really mattered. I saw the way our own sisters were caring for each other. Some of our (birth) family lived with us in Lacombe, and we lived with some of our families in central Louisiana. There was so much love. Almost immediately, we saw an outpouring of prayers and financial support from men and women religious from throughout the country. They came in person and they sent their money. The initial fear was gone and made the way for confidence and gratitude.”

Not immediate yes
When invited by Sister Sylvia to consider the Department of Religious position, Sister Beth was starting a well-deserved sabbatical.

“I had no good reason to say no, but I was not in the space to say yes,” she said. “Those eight years (as president) were a privilege, but there was a deep tiredness in me to know I wasn’t healed.”
She discussed her concerns with Archbishop Gregory Aymond and agreed to give him an answer after discernment at an October retreat.

“The more we talked, I could feel the enthusiasm building in me, but I knew I needed the sabbatical,” she said.

Her inkling to accept the position was confirmed at the retreat.

“It just seemed right,” she said, adding that she will handle the position on a part-time basis for three months before going full-time in April upon completion of her sabbatical.
Magnificat House resident
Sister Beth hasn’t yet mapped out grand plans for the office but already has attended celebrations for the Daughters of Charity (180th anniversary) and the Ursulines (celebrating Our Lady of Prompt Succor’s assistance in the Battle of New Orleans).

As was her predecessor, she is a passionate about the Magnificat House of discernment for women. She was asked by Archbishop Aymond to consider living at the house, which she thinks is a marvelous idea.

“I could help and offer (religious) teaching,” she said. “My background in spirituality fits. So, I think I could be useful to that house.”

She opens her arms to all men and women religious, wanting to listen and take cues from them.

Paraphrasing Thomas Merton as he spoke about the common life, Sister Beth said she will work to discover ways religious can share their hardships and gifts of joy.
“I think that’s what this office is all about – discovering how religious in our archdiocese can share with each other and rejoice in that,” she said. “I keep remembering John’s Gospel, ‘Of God’s fullness, we have received a share. Grace in return for grace.’ Each of our communities has received a share of God’s grace and God’s fullness, and we share it with the city of New Orleans and each other. It is a delight to share this.”

The Department of Religious is coordinating the upcoming World Day for Consecrated Life Feb. 8 from 11 a.m.- 2 p.m. at the Sisters of the Holy Family motherhouse. The annual archdiocesan Jubilarian Mass for religious is scheduled May 4 at 3 p.m. at St. Rita, New Orleans. For details, call 861-6281.