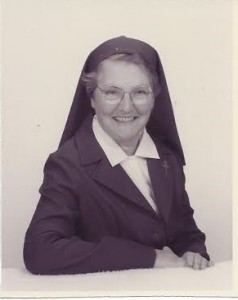 Sister Mary Hilary Hernandez, O. Carm., a Sister of Mount Carmel, principal and teacher, died March 17, 2014 at Our Lady of Lourdes Hospital, Lafayette, LA. She was 89 years old, and in the 72nd year of her religious profession.

Sister Hilary graduated from St. Gabriel Elementary in St. Gabriel, LA in 1939 and from Mount Carmel Academy in New Orleans, LA in 1942. At Mount Carmel and Loyola University in New Orleans, LA she majored in Specialized Elementary Education and received her bachelor’s degree, followed by her teaching certification, in 1963. Devoting almost 29 years to education, beginning in 1942, she taught at Mount Carmel schools in Abbeville, Carencro, Lafayette, LA and at St. Dominic in New Orleans, LA, St. Joseph the Worker in Marrero, LA, where she served as principal and at St. Joseph in Rayne, LA. She also served as principal at Our Lady of Prompt Succor in Westwego, LA. She served one year as a missionary with the Sisters of Mount Carmel in the Philippines. She also served the congregation as Novitiate Superior, Motherhouse superior, treasurer and dietary supervisor as well as maintenance manager in Lacombe, LA. From 1983 to 2001 Sister Hilary worked in parish ministry in St. Dominic Parish, New Orleans, LA until her retirement to the Motherhouse. Since Katrina Sister Hilary has resided at St. Leo Seton Convent, Lafayette, LA. Sister Hilary received the Associated Catholic Charities Outstanding Religious Award for service to senior citizens and the St. Dominic Seminar Citizens Award. In 1991 the St. Dominic Kaycee Auxiliary and K.C. Council 3729 tapped her as “Sister of the Year.”

A Mass of Christian Burial will be celebrated in New Orleans at the Mount Carmel Motherhouse chapel Thursday, March 20 at 10:00 a.m. followed by interment in St. Louis No. 3 Cemetery.