The Sisters of Mount Carmel hosted the School Leadership Formation Program on September 27, 2014 from 9:00 a.m. to 3:15 p.m. at the Motherhouse in Robert E. Lee Boulevard, New Orleans. 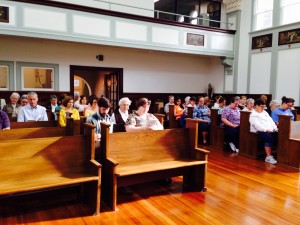 Mass in the Motherhouse Chapel 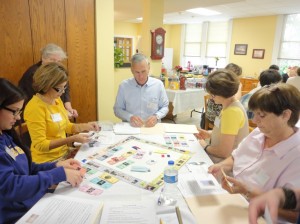 The program started with a social on Friday, September 26, which was attended by the members of the Sisters of Mount Carmel and some of the participants from Mount Carmel Academy in New Orleans. On September 27, 2014 the participants enjoyed the Carmel Monopoly on the history of the Sisters of Mount Carmel facilitated by Sister Mary Ellen Wheelahan, with emphasis on the saying inspired by Pope John Paul II, “Carmel: Where Prayer Becomes Life and Life Flourishes.” For part of the morning session, the participants watched a lecture from one of the Carmelite Third Order members, Keith J. Egan, Ph.D., T.O.C. On “Come Pray with Carmel in This New Millennium,” after which they were given time for silence and reflection. Miss Denna Cheramie, Assistant Principal of Mount Carmel Academy, addressed the participants in the afternoon session on Carmelite Prayer in the Classroom, Catholic Social Teaching, and Carmelite Influence on Social Issues. The program was very informative and life-giving to each participant.

Surely Carmel is alive in our education ministry, where prayer and action work hand in hand.